As some of my long time followers know, Brookside Gardens is my go to place to photograph when the weather is nice.  The growing season is well underway and their butterfly exhibit is open.  I don’t think it was open the last time I went, but I was with my sister on that trip so there was no going through that exhibit in peace anyway lol.

Yesterday I posted a few of photos of the Pipeline Swallowtail (wishing I had better ones to offer).  I wanted to go back in the afternoon and get a shot of the Pipeline in chrysalis stage, but that didn’t work out.  There was a caterpillar who had attached itself to the underside of a pot in the exhibit, they estimated that in a couple of hours it would be done.  I stopped by this exhibit on my way out of the gardens, not in… so I’d either have to hang around, or come back.  The gardens were getting busy, so hanging around wasn’t an option, too many people… and you know me and crowds lol.

Anyway, today’s topic is a Morpho, which is a generalization for this butterfly I found.  I think it’s a blue morpho to be honest, but I’m not exactly sure.

It was very similar to the Owl butterflies, which I will share later in the week, but it had too many spots for that to make sense for me. 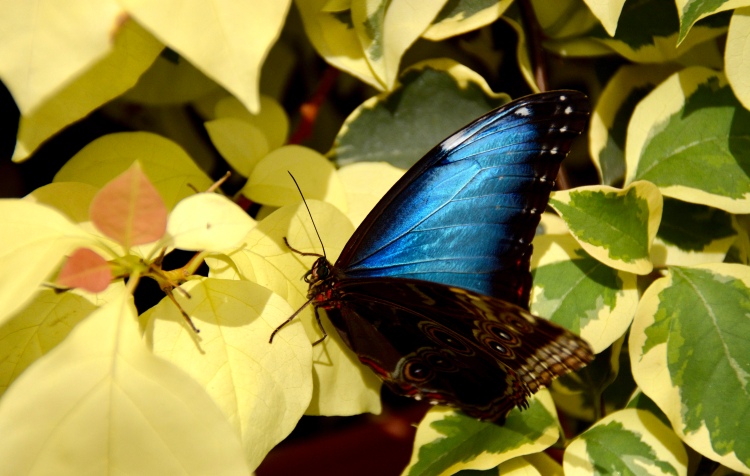 Whatever it was, I thought it was pretty and well worth a post of its own.  I hope you agree.

2 thoughts on “Wings of Fancy | Morpho”